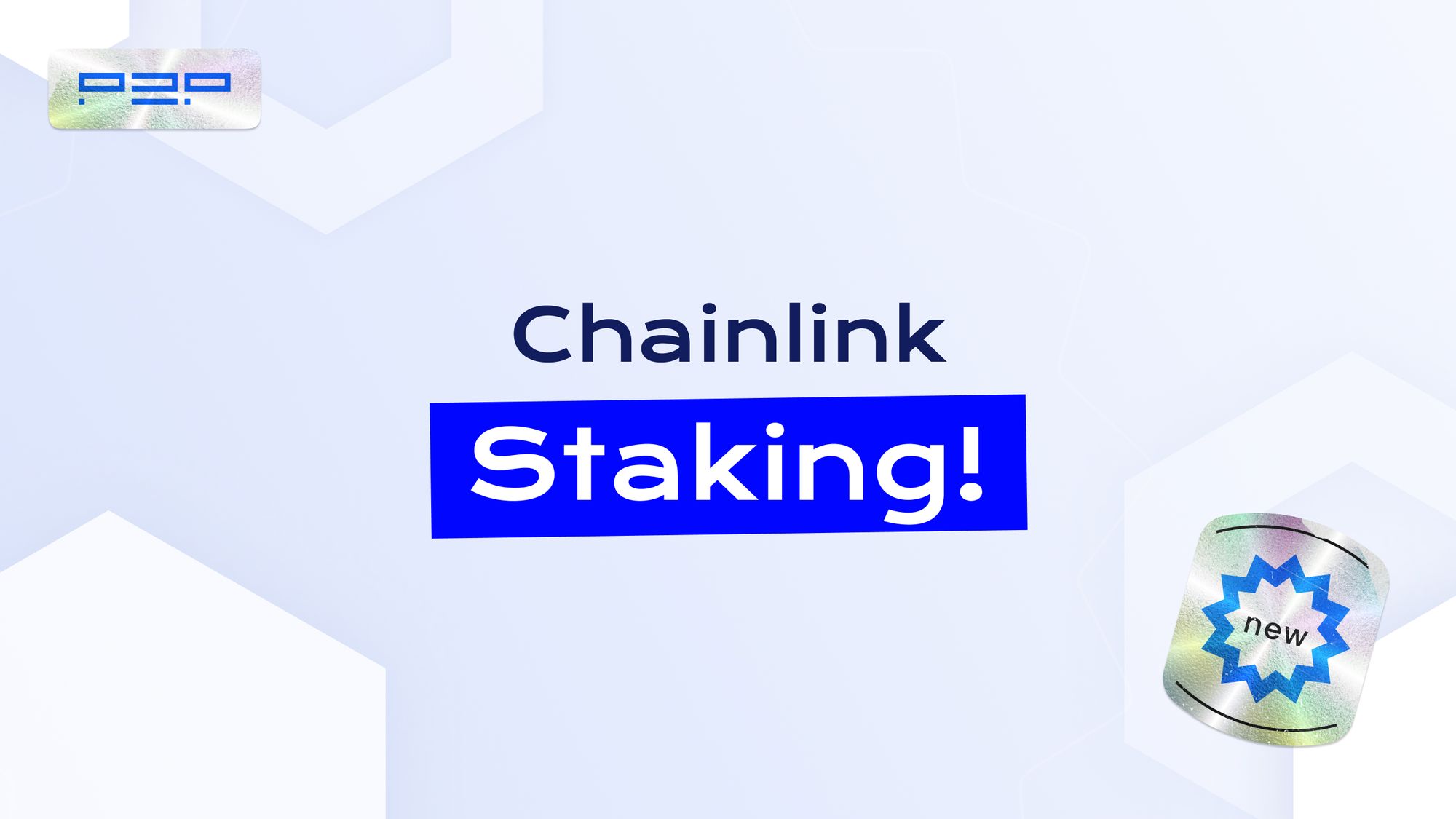 Staking will be a major breakthrough for Chainlink and the community from a number of different perspectives. Let us uncover how you put your LINK tokens to use and get rewards for helping Chainlink secure DeFi and the larger Web3 ecosystem.

As you know, Chainlink is the industry standard oracle network that has enabled over $6.4 trillion in transaction value across Ethereum, Polygon, Solana, and 12 other blockchain networks, at the time of writing. They do so by providing highly available and accurate on-chain market data, for hundreds of data feeds. When you use a DeFi application on Ethereum, it is highly likely that it leverages Chainlink Data Feeds to get the latest token prices in order to execute a lending, swap, or any other smart contract.

The Chainlink Network achieves decentralization and security in two ways:

The value in this approach to decentralization has been shown time and again during periods of extreme market volatility, when Chainlink’s multiple layers of decentralization and defence-in-depth design help mitigate the risk of market manipulation, oracle attacks, and other exploits.

P2P has been operating on Chainlink for the last two years and supports price feeds and automation for Ethereum, Solana, Moonriver, Fantom, Harmony, and Avalanche.

As the total value secured by Chainlink oracle networks grows, the reward for a hypothetical attack increases, hence a need for increased cryptoeconomic security that maximizes the cost of attack for malicious actors. As of now, the node operators are sufficiently decentralized and perform well enough so that further improvements in this area only provide marginal gains. Staking however, can drive way more significant security improvements via new incentives for the node operators and token holders.

How staking is going to work

Node operators and the broader Chainlink community will be able to stake their LINK via node operators and get rewards for helping enhance the cryptoeconomic security of the network. ‌‌‌‌Providing accurate and timely feed updates is necessary for the node operators to actually receive those rewards and in order to enforce the best data quality.

In the early-stage beta implementation of Chainlink Staking, v0.1, stakers will have the opportunity to monitor the feed, raise an alert, and get rewarded if they successfully detect in a timely manner that the ETH/USD feed has not met certain performance requirements. In v0.1, alerting conditions will be focused on feed uptime but will expand in scope in later versions.

The Chainlink Staking design is quite complex, so its elements are going to be brought forward step by step.

According to a Chainlink blog post, there are 3 criteria for participating in the Chainlink Staking v0.1 Early Access which will launch on mainnet in December 2022:

You can use the Early Access Eligibility App to check their eligibility for potential priority access staking in Staking v0.1.

As we discussed previously. The primary goal of Chainlink is to increase the security behind the infrastructure that supports DeFi. As outlined in a blog post, Chainlink Staking is being designed with four long-term goals in mind:

Like previous Chainlink updates the implementation of LINK staking is being done gradually. While the initial focus will be on building a reputation framework and staker alerting system, the second stage will look to implement slashing to further boost security and user fees as rewards. Last but not least, loss protection is being studied to help protect participants when an oracle network deviates from its service-level agreement.

The first version of staking is expected to go live by the end of 2022. Stay tuned!

At P2P, we are watching closely as LINK staking gets close to launch, and will post updates on this topic here in the blog as soon as more details are found. We are also exploring what kind of tools we can bring forward to help the community. So watch this space, much more to come in the near future!

Check your eligibility for Early Access to Chainlink Staking v0.1.

Contacts us if you are interested in staking LINK:

P2P Validator is a world-leading staking provider with the best industry security  practices and proven expertise. We provide comprehensive due-diligence  of digital assets and offer only top-notch staking opportunities. At the time of the latest update, more than 1,5 billion of USD value is staked with P2P Validator by over 25,000 delegators across 25+ networks. We have successfully participated in AIT3 and joined Aptos as a partner. P2P is committed to the long term success of the Aptos.

<p>We are happy to announce the upgrade of the Lido on Solana program from December,6 to December, 8.</p><p>This upgrade focuses on validators in order to enable a more healthy validator economy: allowing operators to use their existing public Solana nodes with a commission of not more than 5%.</p><p>The proposal has successfully gone through <a href="https://snapshot.org/#/lido-snapshot.eth/proposal/0x5844beba37131b3621c5c96621603db7cb7e2771d1c690dc6869ebd117e12abb">Lido DAO voting</a> , and the program code was <a href="https://reports.neodyme.io/reports/lido_v2_report/">audited</a> by <a href="https://neodyme.io/">Neodyme</a>.</p><h2 id="why">Why</h2><p>The reasoning and other details on this update are described in this <a href="https://research.lido.fi/t/lido-on-solana-protocol-upgrade-proposal/2959">forum post</a>. This update is mainly aimed at changes in how the contract work with validators, these are the main points:</p><ul><li>Validators will not need to set withdraw authority to Lido anymore and they will receive block rewards and staking rewards in SOL (instead of stSOL) to their accounts directly.</li><li>There is no need for 100% commission nodes, so node operators can use their public node in the Lido set or make their existing Lido node public.</li><li>Set the maximum node commission to 5% to be eligible to receive a delegation from Lido on Solana.</li></ul><p>As per our<a href="https://p2p.org/economy/lido-on-solana-validator-set-vision/"> vision of a decentralized validator set</a>, we look to enable a more healthy validator economy where new and existing validators can look to participate. Our goal is to create a sustainable, high-performance validator set for Solana.</p><h2 id="rewards-distribution-model-change">Rewards distribution model change</h2><p>As an expected result of the changes above, the staking rewards distribution model will change slightly.</p><ul><li>In the current version of the smart contract, all the rewards are distributed simultaneously and precisely between node operators (5%), the DAO treasury (4%), the developers (1%), and the stakers (90%).</li><li>After the update, the 5% (max, it can be set lower) goes to the node operator, then from the remainder, the DAO treasury (4%) and the developer (1%) fees are subtracted. The remaining share goes to the stakers.</li></ul><p>As a result, the share of the treasury and the developer decreased slightly, the validator’s share remains the same, and the staker’s part (APY) increases slightly.</p><h2 id="update-timeline">Update timeline</h2><p>All these changes were published as proposals (<a href="https://research.lido.fi/t/lido-on-solana-protocol-upgrade-proposal/2959">main contract changes</a> and <a href="https://research.lido.fi/t/lido-on-solana-maximum-validator-commission-proposal/2979">max commission setting</a>) on the Lido research forum. We also launched a <a href="https://snapshot.org/#/lido-snapshot.eth/proposal/0x5844beba37131b3621c5c96621603db7cb7e2771d1c690dc6869ebd117e12abb">DAO voting</a> concerning these changes, which ended successfully on the 25th of October.</p><p>We divided the update process into 3 main phases: preparation, program update, and post-deployment phases.</p><h2 id="preparation-phase">Preparation phase</h2><p><strong>Duration:</strong> 1 epoch;<br><strong>Impact:</strong> none;</p><p>During this phase, we will deactivate all the validators. This will be achieved by creating a special transaction and having multisig owners sign it. Validators will be deactivated at the start of the next epoch.</p><p>We plan to execute this transaction at the end of the epoch, so for most of the epoch, everything will work as expected.</p><h2 id="program-update-phase">Program update phase</h2><p><strong>Duration</strong>: 1 epoch;<br><strong>Impact:</strong> Unstake commands can’t be performed, validators are not voting, and not getting any rewards.</p><p>During this phase, all the stake is stored in Lido on Solana reserve account, and all the validators are deactivated and not voting. During this phase users still can stake their SOL and get stSOL, but obviously can not unstake. They can operate their stSOL in DeFI apps without any issues though.</p><p>In this epoch, we will update the program and bring it to life by creating a special transaction. Multisig owners will check and sign it. The updated program will start working on the next epoch.</p><p>During this epoch, validators are to configure their nodes to participate in the Lido pool with new requirements (public node, ≤5% commission). At the end of this phase, we create another transaction that will add the validators to the Lido on Solana pool on the next epoch.</p><p>Maintainer bots also have to update their program and restart in this phase too.</p><h2 id="post-deployment-phase">Post-deployment phase  </h2><!--kg-card-begin: markdown--><p><strong>Duration:</strong> 2-4 hours<br> <strong>Impact:</strong> none</p> <!--kg-card-end: markdown--><p>In this phase, everything starts working as intended. We will check if the validators’ nodes work correctly, vote, and get rewards. We also going to run the final tests and make sure that all the partners work correctly with our updated CLI, staking and unstacking operations can be performed.</p><p>After this phase, the update concludes.</p><h1 id="summary">Summary</h1><p>As an expected result of the program update process, we are losing rewards for one epoch, and users can’t perform unstake operations during the program update phase.</p><p>This will result in an insignificant APY decrease, but we consider this a reasonable loss and hope to compensate for it with a better-performing validator pool and small changes in the rewards distribution model, as described in the DAO voting proposal.</p><h1 id="documentation-and-guides">Documentation and guides</h1><ul><li>Research forum proposals: <a href="https://research.lido.fi/t/lido-on-solana-protocol-upgrade-proposal/2959">1</a>,<a href="https://research.lido.fi/t/lido-on-solana-maximum-validator-commission-proposal/2979">2</a></li><li><a href="https://snapshot.org/#/lido-snapshot.eth/proposal/0x5844beba37131b3621c5c96621603db7cb7e2771d1c690dc6869ebd117e12abb">LIDO DAO Voting</a></li><li><a href="https://docs.solana.lido.fi/frontend-integration/manual-instructions/">Migration guide for external integrations</a></li></ul>