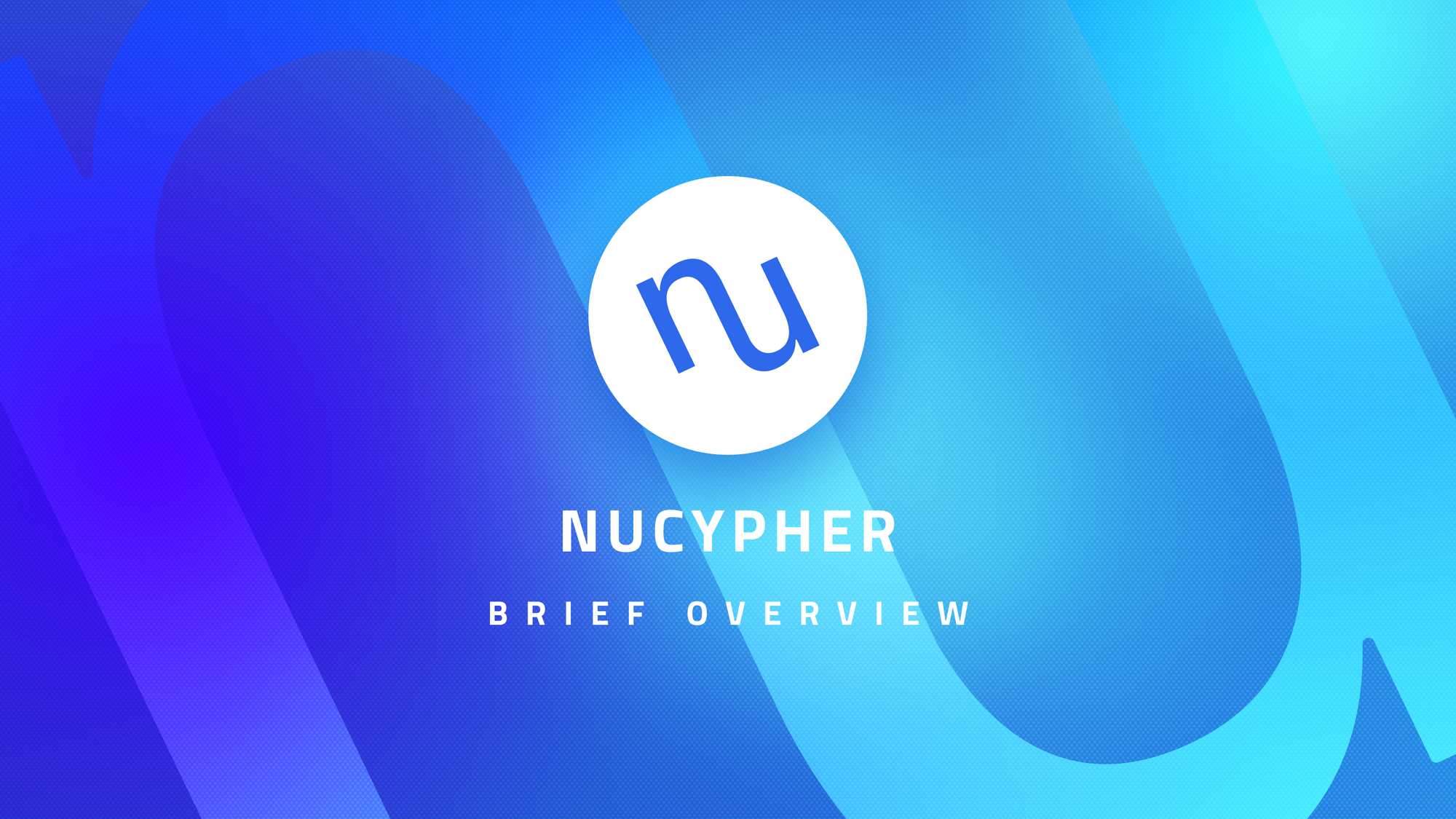 NuCypher is a decentralized secret management network where a group of nodes (workers) perform proxy re-encryption to manage permissions on encrypted data instead of a centralized server. It allows safe data exchange without ability for proxies to learn the plain text info. Correctness of worker behavior is guaranteed by staking and cryptographic proofs. Additional token emission incentivizes node operators to maintain high availability infrastructure and in the case of network rules violation a portion of their holdings will be slashed.

Privacy of sensitive data is a vexed problem and services provided by NuCypher project are attractive and valuable not only in crypto space. The highest growth of data breaches in USA was in the healthcare sector demonstrating 80% increase from 2017 to 2019 including the transmission of confidential data without proper encryption.

Enterprises also are seeking ways to avoid data leaks and securely manage and share sensitive data. The Global Key Management as a Service Market market size is expected to grow from $363 million in 2018 to $1,28 billion by 2023 and is estimated to reach $2,29 billion by 2025 during the period 2019–2025.

In order to participate in the network as a worker and perform re-encryption, node operators have to lock NU tokens. At the start rewards from providing re-encryptions might be low so until the project gets traction, node operators will be incentivized mostly by emission of new tokens. Holders can delegate their funds and earn a share of rewards in proportion to their stake.

Compensation is higher when tokens are locked for a longer period. To get maximum compensation stakers have to lock their funds for at least a year to be allowed to accept policies with longer terms. Shorter commitment will result in lower rewards for participants and they will not be allowed to provide re-encryption if the length of a particular policy is higher than chosen lock-up period. Staking since the beginning of mainnet with compounding of rewards also will result in higher returns. The whole stake can be split into sub-stakes where each will have its own lock-up period.

In existing representation only one staker can delegate to a worker in near future, staker can be a smart contract that accepts delegations from various addresses. We believe in future adoption of NuCypher and will provide the long term staking maximizing staking rewards.

NuCypher token NU is ERC20 token the main purpose of which is to act as a staking token in the network with limited liquidity and low volatility. Amount of provided re-encryptions will be proportional to stake which is guaranteed to be locked at the end time of the policy. Node operators with higher stake presuming higher loss in case of bad behavior and ability to accept policies with longer terms.

NuCypher based on Ethereum blockchain means that users should have ETH on the worker node’s address to pay tx fees. Workers also share service fees paid by end users in ETH for providing re-encryptions.

Over 350 000 ETH were locked in the smart contract by participants to take part in WorkLock token distribution model proposed by NuCypher team.

There are two potential slashing conditions:

At network genesis, the protocol will be able to detect and attribute instances of incorrect re-encryptions. If there are many sub-stakes and misbehavior occurs, unlocked tokens which do not participate in staking will be slashed in the first place and then ascending sub-stakes with lower lock-ups.

A false re-encryption is not like a double-sign. Correctness of a re-encryption can be proved via a zero-knowledge proof. If users receive incorrect re-encryption, they can provide this proof to the network, which will result in the node getting slashed. For each violation, 2×10−18 NU tokens will be deleted from the offender’s stake.

In the future, slashing parameters can be changed by the Decentralized Autonomous Organization (DAO) that is managed by NU stakeholders who operate nodes. It makes NuCypher a community driven project from the very beginning.

At network launch slashing for worker unavailability is turned off until it will be enabled by the DAO if needed. Stakers will not receive inflation rewards for any period the node is offline. A worker that doesn't timely apply updates and constantly experiencing downtime will also miss rewards.

P2P Validator is a world-leading non-custodial staking provider securing more than $3 billion by over 10,000 delegators across 25+ high-class networks. Our team has close connections with NuCypher and we have participated in the incentivized testnet since the beginning. P2P Validator invested its own funds in NuCypher project in 2017 and intends to support the network in the long term.

Want to stake NU with us? Alexey will be happy to help. Contact [email protected] to get personal assistance.

<p>Oasis protocol is a decentralized privacy-preserving platform for cloud computing that allows safe data sharing and ownership enabling computationally complex applications. Oasis provides confidentiality at every layer of the protocol. The network is secured by proof-of-stake where the rectitude of validators responsible for consensus and nodes providing computations is provided by slashing in case of misbehavior. At the outset, validators are incentivized by gradually decreasing emission schedule and transaction fees.</p><h3 id="current-state-and-market-potential"><strong>Current state and market potential</strong></h3><p>Oasis team plans to launch Mainnet Beta (fully featured network with disabled transfers) soon after Mainnet Dry Run that is launched to ensure that the network is healthy.</p><p><a href="https://www.gartner.com/en/newsroom/press-releases/2019-04-02-gartner-forecasts-worldwide-public-cloud-revenue-to-g">Gartner projects</a> the market size and growth of the cloud services industry at nearly three time the growth of overall IT services by 2022. According to IDC forecast worldwide spending on public cloud services and infrastructure is set to double growing from $229 billion in 2019 to almost $500 billion by 2023.</p><p>At the same time more data is stored in the clouds posing higher security and privacy risks which are the most concerning for data owners. The danger of cloud breach <a href="https://leftronic.com/cloud-computing-statistics/">has increased by 18.4% since 2016 while 60% of companies</a> use cloud technology to store confidential data.</p><p>Oasis team addressed privacy issues by implementing<a href="https://docsend.com/view/3aznduk"> Ekiden</a> that allows nodes to perform computations off-chain in a trusted execution environment without access to the data itself.</p><h3 id="token-allocation-and-purpose"><strong>Token allocation and purpose</strong></h3><p>Oasis Labs raised $45 million. The overall token allocation presented in the graph below. Total supply is capped at 10 billion ROSE. For staking rewards foundation allocated ~2 billion ROSE.</p><figure class="kg-card kg-image-card"><img src="https://p2p.org/economy/content/images/2020/09/token-dist-oasis-pie.png" class="kg-image" alt loading="lazy" width="695" height="371" srcset="https://p2p.org/economy/content/images/size/w600/2020/09/token-dist-oasis-pie.png 600w, https://p2p.org/economy/content/images/2020/09/token-dist-oasis-pie.png 695w"></figure><p>Oasis native token is a staking unit with limited liquidity and low volatility serving the purpose of securing the network and incentivizing nodes to follow the protocol rules. Transaction fees are also denominated in ROSE as well as a payment for provided computations after this feature will be enabled.</p><p>There will be no public sale due to regulation risks. To acquire tokens you should wait for official announcements from the Oasis team and listing on exchanges.</p><h3 id="staking-economics"><strong>Staking economics</strong></h3><p>Oasis currently uses Tendermint consensus. Nodes performing confidential computations utilize TEEs to execute smart contracts and do not have access to the data itself while validators finalize transactions and update the state of the blockchain. Oasis network will launch with a focus on the consensus layer of the protocol. <strong><strong>To begin with, rewards from staking will be </strong>~<strong>15% and then  decrease to 1</strong>2<strong>%</strong> in six month.</strong> Holders can delegate their funds increasing overall security of the network and earn a share of rewards in proportion to their stake. There is a minimum required delegation of 100 tokens. Staking since the beginning of mainnet will result in higher returns for delegators.</p><figure class="kg-card kg-image-card"><img src="https://p2p.org/economy/content/images/2020/09/table-8-1--1.png" class="kg-image" alt loading="lazy" width="1368" height="620" srcset="https://p2p.org/economy/content/images/size/w600/2020/09/table-8-1--1.png 600w, https://p2p.org/economy/content/images/size/w1000/2020/09/table-8-1--1.png 1000w, https://p2p.org/economy/content/images/2020/09/table-8-1--1.png 1368w" sizes="(min-width: 720px) 720px"></figure><h3 id="slashing-risks"><strong><strong>Slashing risks</strong></strong></h3><p>At the time of mainnet launch, the protocol will slash <strong><strong>only for double-signing</strong></strong>. At the start the <strong><strong>minimum amount of 100 tokens will be slashed</strong></strong> and node functioning stopped in order to prevent the node from being over-penalized and resulting in losing delegations. Validators will have to change operating address and attract delegations to participate in consensus. There is <strong><strong>no slash for liveness or uptime at launch</strong></strong>, but a node would need to sign at least 75% of blocks in the epoch to receive corresponding rewards.</p><h3 id="about-p2p-validator"><strong><strong>About P2P Validator</strong></strong></h3><p><a href="https://p2p.org/">P2P Validator</a> is a world-leading non-custodial staking provider securing more than $3 billion trusted by over 10,000 delegators across 25+ high-class networks. Our team has close connections with Oasis team and we have participated in the incentivized testnet since the beginning. P2P Validator invested its own funds in Oasis project and intends to support the network in the long term.</p><h3 id="useful-oasis-resources"><strong><strong>Useful Oasis resources</strong></strong></h3><p>Website:<a href="https://www.oasislabs.com/"> https://www.oasislabs.com/</a></p><p>Github:<a href="https://github.com/oasislabs"> https://github.com/oasislabs</a></p><p>Whitepaper:<a href="https://docsend.com/view/grdq39h"> https://docsend.com/view/grdq39h</a></p><p>Non-tech paper:<a href="https://docsend.com/view/5uuhcj3"> https://docsend.com/view/5uuhcj3</a></p><p>Blog:<a href="https://www.oasislabs.com/blog"> https://www.oasislabs.com/blog</a></p><hr><p><em><em>Want to stake Oasis with us? </em>Paul <em>will be happy to help. Contact</em></em> <em>p.pavlov<em>@p2p.org</em></em> <em><em>to get personal assistance.</em></em></p><hr><p><strong><strong>P2P Validator</strong></strong> provides secure non-custodial staking. Subscribe to our channels and stay tuned for updates and new blog posts.</p><p><strong><strong>Web:</strong></strong><a href="https://p2p.org/"> https://p2p.org</a></p><p><strong><strong>Twitter:</strong></strong><a href="https://twitter.com/p2pvalidator"> @p2pvalidator</a></p><p><strong><strong>Telegram:</strong></strong><a href="https://t.me/p2pvalidator"> https://t.me/p2pvalidator</a></p>