Loss of Epoch Rewards in Graph Network: A Post-mortem 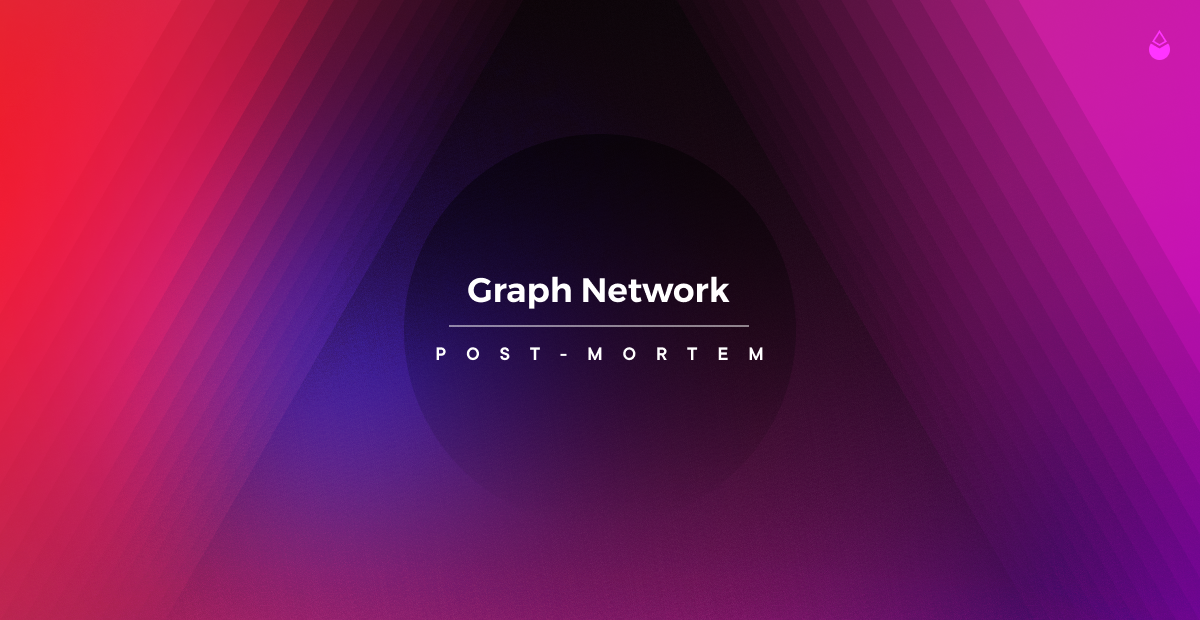 Due to an old version of an indexer agent combined with a short-time node desynchronisation, closed allocation resulted in a zero proof of indexing on February 6th 2021. Due to this rewards for the epoch vanished. Lost rewards will be fully compensated by waiving our fee and sharing our own indexing rewards with our delegators.

An oversight in an upgrade process led to the indexer-agent version being out of date. A minor hiccup in Ethereum node operation coincided with the allocation closing, resulting in the closing of an allocation without a proof of indexing being submitted. Rewards will be fully compensated over the course of 12 days by charging 0% fee and sharing our own indexing rewards.

We provide regular reward stats on a daily/weekly basis for delegators with locked GRT and thus had no monitoring of epoch rewards after closing an allocation. This led to a minor delay in reaction as reports are filled automatically without human intervention. Right after realising that rewards had been lost we set up an internal investigation.

Additionally was the absence of a well-reviewed upgrade procedure for new indexer releases. The upgrade procedure had no clear standard and checklist of actions to follow. New allocations were opened and no technical mistakes occurred, but existing monitoring that allocation was insufficient. We noticed that monitoring for a subgraph syncing delay had insufficient resolution time-wise so failed to catch a small hiccup in Ethereum node operation.

We close and open allocations on a daily basis so we lost only one day of rewards. We collect statistics on stake changes every day and spotted a problem with reward crediting. We also thank our delegators who have noticed the issue and pointed concerns out in our Telegram channel.

All our Graph Network delegators lost one day of indexing rewards. To compensate and mitigate their loss, P2P will waive the fees for 12 days in addition to distributing all the rewards from our own indexer stake for that period.

We should have had monitoring for new version releases and checked that software is up to date before taking actions. To avoid such issues in the future we have defined a clear written procedure for upgrades and set monitoring for all necessary releases. This case revealed flaws in our existing monitoring so we have now initiated a deep analysis of all metrics improving it from ground up and adding necessary alerts to support this.

We have decided to make reviews for all standard operating procedures more rigorous by allocating more engineering time to these activities. Testing and improvement will be continued on the new testnet where we are already set up. All the crucial operations, upgrades and innovations that can potentially lead to a financial loss will be implemented on testnet first.

P2P takes full responsibility for this and we are sorry for the inconvenience. Please be assured that P2P is taking actions to eliminate even a small probability of such an event occurring in future.

<p><em>This post will outline incentives for Solana token holders to stake SOL and earn rewards by securing the network.</em></p><p><strong>Stake your SOL and earn up to 8% in staking rewards using our simple <a href="https://p2p.org/economy/stake-sol-solana-with-solflare-wallet-and-ledger/">step-by-step guide</a> for staking with Solflare Wallet and Ledger Nano S/X.</strong></p><p>Inflation has been enabled in <a href="https://p2p.org/solana">Solana</a> allowing SOL delegators to earn rewards for contributing to the security and decentralisation of the network. </p><p>We've gathered the most important information related to SOL staking and inflation below. For more details, visit <a href="https://p2p.org/solana">p2p.org/solana</a>. </p><h2 id="solana-inflation">Solana Inflation</h2><p>In order to compensate node operators for state validation and delegators for locking their funds, every epoch (~2-3 days), protocol issues new SOL based on emission rate called inflation. <strong>Every epoch staking rewards are added to the active stake automatically.</strong> Inflation parameter is defined on a protocol level representing annual emission percentage. The exact value of new minted SOL is recalculated every epoch based on the total supply.</p><p>Solana token emission is distributed among validator pools based on their stake weight in the network. Every epoch a special program on Solana calculates the weight of all active stakes and assigns points that are used to proportionally divide SOL rewards among participants for that period.</p><p>A decision about inflation rate value is very important for sustainable network growth. It should incentivize participants to stake, cover costs of operating for validators and at the same time avoid over dilution of network users. <strong>For the first year annual emission will constitute 8%</strong>. In the following years inflation percentage will be decreasing by 15% per year until emission reaches ~1,5%.</p><p>Another revenue source is derived from transaction fees. It is expected to be relatively low for the first years. In current implementation 50% of transaction fees is burned while the rest goes to the current leader who processed the transaction.</p><h2 id="sol-staking-rewards">SOL Staking Rewards</h2><p>With the enabling of Solana inflation, SOL token holders are now able to earn rewards on their staked tokens. </p><ul><li>The Solana <strong>inflation/emission rate</strong> will start at 8% and decrease by 15% annually until it reaches a long-term inflation of 1.5%.</li><li>The <strong>SOL rewards</strong> <strong>are</strong> <strong>distributed</strong> to delegators every epoch, which is approximately ~2 days.</li><li>The <strong>Solana</strong> <strong>warm-up period</strong> - the time taken for your SOL stake to start earning rewards is approximately ~2 days if the amount is less than 25% of staked tokens.</li><li>The <strong>Solana cool-down period</strong> - time for your stake to become liquid after you stop staking is approximately ~2 days if the amount is less than 25% of staked tokens.</li><li>Your staking <strong>rewards are compounded automatically</strong>. </li></ul><p>In the beginning all Solana staking rewards will be distributed to validator pools. In the future, additional percentages from total issuance can be directed to the ecosystem development purposes and archivers, network participants who provide storage service downloading parts of the ledger and providing proof of replication of storing the segments.</p><p>The efficiency of Solana staking from an economic perspective depends on the overall participation. The total issuance is distributed to active delegators. If less than all SOL are staked, delegators will receive higher rewards than initial inflation.</p><figure class="kg-card kg-image-card"><img src="https://p2p.org/economy/content/images/2021/02/Sol-infl.png" class="kg-image" alt loading="lazy" width="775" height="436" srcset="https://p2p.org/economy/content/images/size/w600/2021/02/Sol-infl.png 600w, https://p2p.org/economy/content/images/2021/02/Sol-infl.png 775w" sizes="(min-width: 720px) 720px"></figure><p>For every epoch (2 days), the annual staking yield can be calculated using the formula:</p><p><em>APY = inflation * archiver_share * foundation_share / staking_ratio</em>, where<br><em>staking_ratio = staked_tokens / total_supply</em></p><p>At time of launch, <em>archiver_share </em>and <em>foundation_share </em>are planned to be set to 0%, so 100% of emission will initially be going to validator pools. <strong>The</strong> f<strong>irst years will be the most attractive for Solana delegators representing an opportunity to increase the network share.</strong></p><p>With the development of staking derivatives it will be possible to generate additional yield on top of staking rewards.</p><hr><p><em>Special thanks to <a href="https://twitter.com/sciencethedata">Eric Williams</a> for valuable additions. Having trouble getting started? Please get in touch with a P2P representative by emailing [email protected] or ask for assistance in our <a href="https://t.me/P2Pstaking">Telegram chat</a>.</em></p><hr><h2 id="about-p2p-validator">About P2P Validator</h2><p>P2P Validator is a world-leading non-custodial staking provider <strong>securing more than 3 billion USD value from over 10,000 delegators across 25+ high-class networks</strong>. We are early investors in Solana and have supported the network from the first block taking part in all stages of testing and voting.</p><hr><p><strong>Web</strong>: <a href="https://p2p.org">p2p.org</a><br><strong>Stake SOL with us</strong>: <a href="https://p2p.org/solana">p2p.org/solana</a><br><strong>Twitter</strong>: @p2pvalidator<br><strong>Telegram</strong>: <a href="https://t.me/P2Pstaking">t.me/P2Pstaking</a></p>