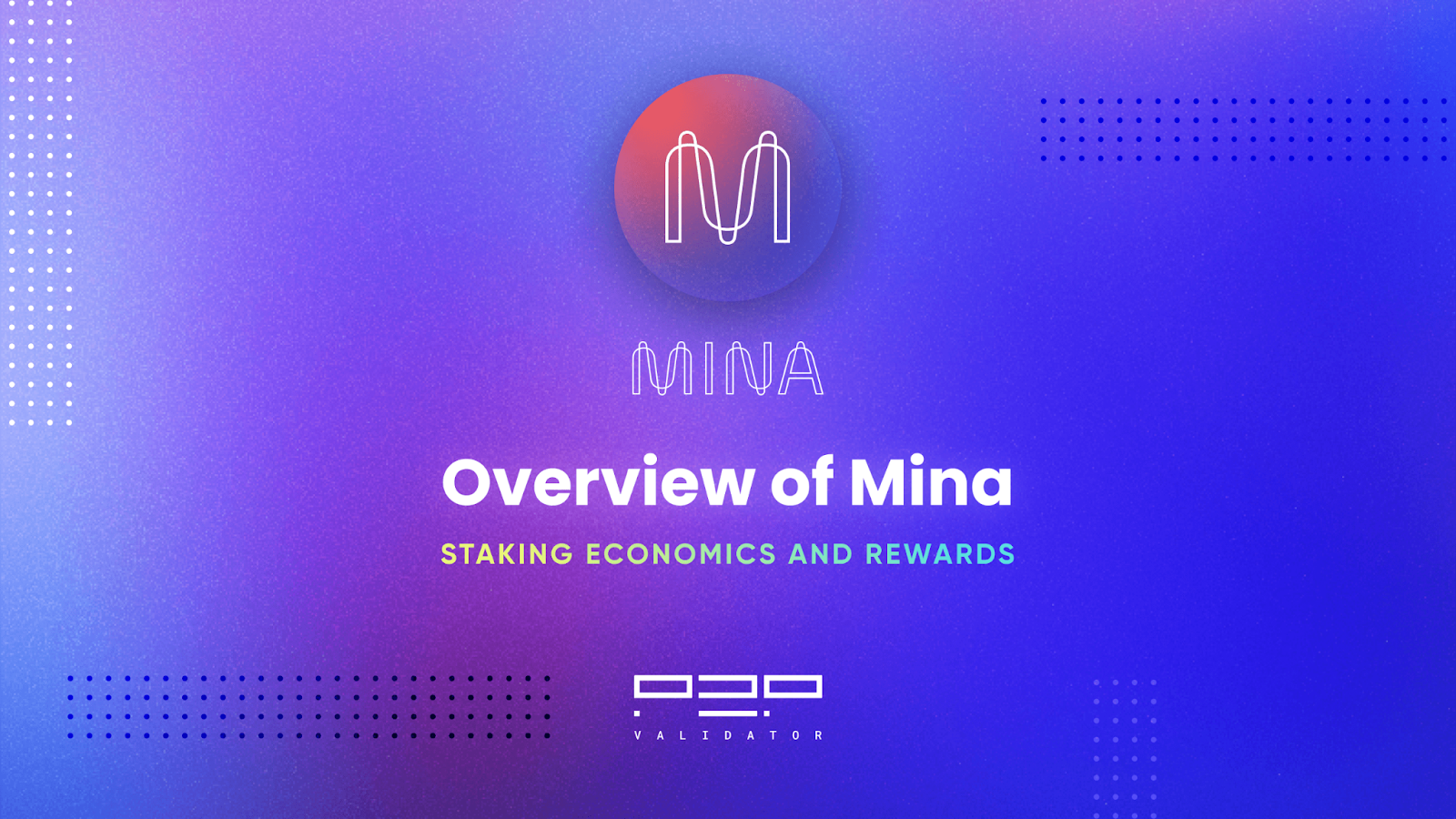 In this blog post we will briefly walk through the Mina protocol incentives and cover staking rewards calculation.

Most PoS networks implement continuous token emission to incentivize node operators and delegators. Mina is not an exception. There is no cap of a max MINA supply as it grows every block. Every canonical block (successfully produced block written in the main chain) contains a coinbase (block reward) that is distributed to a node operator that produced it.

Token emission will decrease periodically until it reaches 7% annually. This schedule can be changed by the community via governance procedure in future.

For token holders, staking is important to avoid dilution of their total share in Mina network. Some MINA tokens are locked for a certain period of time. They are not transferable but capable of being delegated or staked. Coinlist token sale participants and those who purchased MINA on exchanges have unlocked MINA that can be transferred to any Mina address.

To further incentivise staking every address without locked Mina will receive a higher return on its Mina due to supercharged coinbase.

In Mina periods are split into epochs that last approximately 14 days and 21 hour. Staking operations like delegating and undelegating are executed immediately, but effects are applied only a couple epochs later due to Mina specifics. Stake distribution and balances are fixed for a particular epoch and any changes are taken into account with a time lag of 1-2 epochs.

Epoch consists of 7140 slots, each is a period of time when node operators can create a block and produce SNARKs (proofs for transactions that compress the size of a blockchain). Currently it lasts ~3 min, but it can be shortened in future.

Chances of being selected as a block producer are proportional to the node operator's stake. The final output is determined by a verifiable random function (VRF). Multiple pools can be assigned with the same slot potentially resulting in a short-range fork that will be resolved by Ouroboros Samasika.

In fact, all accounts delegated to a particular pool participate in the VRF distribution to win the slot. Staking pool that is being delegated by the winning account can compete for the slot and receive a reward if the block was selected by the consensus rules as a canonical one. In general, coinbase is 720 MINA at the moment, but if the account that was assigned to that slot holds only unlocked tokens - coinbase is doubled being equal to 1440 MINA.

There is no slashing in protocol rules, but rewards to delegators are distributed by block producers manually, pro rata to their share in the pool. It is important to select a reliable block producer as malicious actors can withhold rewards, which will result in a time lost for re-delegating to another pool. In case of a supercharged block, share of delegators with unlocked tokens is doubled to reflect their contribution to the increased coinbase (mechanics might differ among block producers).

There are ~24 epochs in a year and APR will vary in a short period of time (a few epochs) but should smoothen in the long term as more epochs pass. To define expected annual staking return we can extrapolate epoch performance to future periods. This method doesn't give us precise results but allows us to see which epoch had better return compared to others.

Calculation above doesn’t take fees into consideration. The more epochs are aggregated for averaging the better is the approximation of annual staking return. It also doesn’t take compounding into account, but it is possible to summarise actual rewards for a year and see the overall annual return.

In Mina, rewards received from delegating are staked automatically by design. Try to use a simple spreadsheet to check your epoch rewards. We provide reward reports for P2P delegators by request, visit p2p.org/mina for more details.

Note, that payout is not always equal to an epoch reward as some pools (including P2P) distribute rewards more frequently, so you will need to add up those. If you have questions, feel free to join our telegram chat. We are always open for communication.

P2P Validator is a world-leading non-custodial staking provider securing more than $3.2 billion in staked assets by over 10,000 delegators across 25+ high-class networks. P2P Validator is an early genesis member and one of the early seed peer providers. We have been participating in Mina since the first testnet and intended to support Mina in the long term.

<p>We are pleased to announce a collaboration with <a href="https://robonomics.network/">Robonomics</a> for the launch of parachains on the Kusama (KSM) network. Through this partnership, <a href="https://p2p.org/">P2P Validator</a> will roll out, maintain and support infrastructure for Robonomics parachain when Robonomics wins a slot within a Kusama parachain auction. </p><p>P2P Validator will help to ensure a smooth launch and sustained support of Robonomics parachains through rolling out an optimal number of collators and full nodes to organise all associated parachain data. In addition to this, we will work with Robonomics to produce new block candidates by passing them to the relevant validators across the Kusama relay chain.</p><p>Robonomics is an open-source server-less IoT platform on top of Ethereum and Polkadot. Its main goal is to bring the economy of robots into the 4th industrial revolution.</p><p>Kusama parachain is an excellent opportunity for Robonomics to scale up to 1 million IoT devices connected in real-time without any centralized regulators.</p><p>Through this partnership, P2P aims to demonstrate our technical infrastructure capabilities across the Kusama blockchain. As a leading non-custodial staking provider securing more than $3 billion in assets across 25+ staking networks, we are thrilled to work with Robonomics on this exciting project. </p><hr><h2 id="useful-resources">Useful Resources</h2><p>To find out more about Robonomics crowdloan campaign, visit the <a href="https://robonomics.network/kusama-slot/?ref=p2p">dedicated crowdloan page</a>. Don’t forget to unbond your KSM to participate in the crowdloan. </p><p>To learn more about Polkadot and Kusama, please visit P2P’s support centre: “<a href="https://help.p2p.org/en/articles/5161573-kusama-ksm-staking-faq"><strong>Kusama Staking FAQ</strong></a>” &amp; “<a href="https://help.p2p.org/en/articles/5094261-polkadot-dot-staking-faq"><strong>Polkadot Staking FAQ</strong></a>”.</p>